How you can generate an income by selling unwanted mobiles phones or gadgets! | Sell Any Mobile 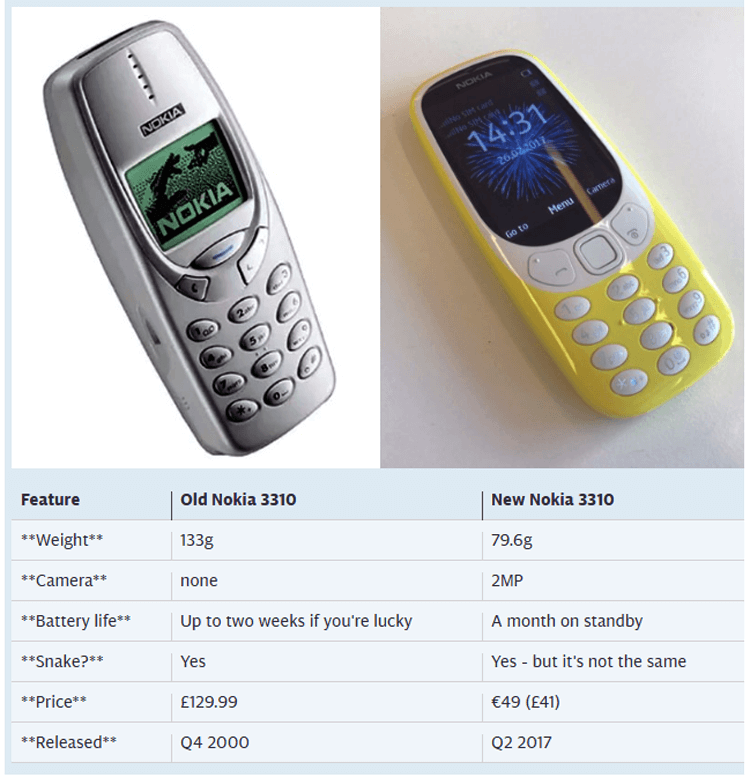 The Nokia 3310 is back from the dead, 17 years later. The iconic phone that was originally launched in 2000 has now been updated. As Nokia looks to launch a new range of Android smartphones, the only phone that people are talking about is this retro wonder, the Nokia 3310.

Thin is definitely in as the 3310 has been on a crash diet. Nearly half the weight and thickness, but slightly taller and wider. But it's not just about the weight: the new Nokia 3310 isn't the chunky monkey that the original version was.

Gone are the squared corners, giving way to softer curves that makes the Nokia 3310 all the more comfortable to hold. At the same time, the profile of the new phone lacks the crude muscularity of the 2000 version. In the year 2000 Putin was elected; in 2017 Trump was elected. Go figure.

The Nokia 3310 is still plastic, but it's now glossy in red or yellow, or matte in blue or grey. The original was usually blue, but often seen in that grey colour like a bowl of gruel. The 2017 Nokia 3310 has a removable back cover, so you can change it, or to access the battery. The 2000 3310 had Xpress-On covers, sold on every street corner (mostly fake and ill-fitting), meaning limitless customisation.

On a serious note, the button layout across the middle of the new 3310 is entirely different, less linear, but still rather basic.

The original Nokia 3310 had a glorious 1.5-inch display that was monochrome. It was just about enough to read SMS messages, make out the numbers you tapped and play Snake. It was flat, offering great contrast, simple and to the point.

The new Nokia 3310 has a huge (by comparison) display at 2.4-inches, stretching over the top half of the phone and curving away to the top. It's also now colour, so the experience is rather different. The new Nokia 3310 is more like feature phones of the mid-2000s, rather than the pure monochrome glory of the original.

In 2000 there were few connections. On the base of the phone was the DC input to charge the phone, but there was no Bluetooth, no Wi-Fi, no nothing.

Fortunately the new Nokia 3310 has moved with the times a bit more. There's Bluetooth to connect to a headset or your car, there's Micro-USB for charging - so no need for that bulky charger - the option for microSD to expand the storage, 3.5mm headphone socket to listen to music or the FM radio.

Neither phone offers 3G though, this is strictly 2G all the way, so it's a phone for talking and texting.

In 2000 the notion of having a camera on a phone was slightly alien. Why would you need one? There were no social networks, the selfie didn't exist and you'd never have been able to share it anyway. Ok, so Friends Reunited launched in June 2000, but really?

In 2017, most phones are judged by their cameras. It's the central feature for many, replacing the cheap compact camera segment with social networks killing the notion of printing photos and making albums.

The new 3310 has a 2MP camera, but the experience is not really worth it. Stick to your iPhone.

The thing that the original 3310 was known for was battery life. In those days, of course, you weren't playing Pokemon Go, snapping Insta selfies, hailing Ubers and streaming Spotify music. You just got the occasional message from a friend, or placed a few calls to arrange a night out. But the battery didn't last forever, it just lasted days.

The new Nokia 3310 battery does almost last forever. With 31 days of standby, you'll be hard pushed to drain this battery. This is a phone you can probably go away with for a week and not need to worry about the charger.

Snake II was the iconic game of the 3310 and other Nokia phones. Eating apples while sitting on the toilet was about as much fun as anyone had in those days. And fun it was. Snake didn't need to be any better, it was basic, but it worked.

The 2017 version of Snake isn't the same thing. It's been reworked by Gameloft, it's full colour, smoothly animated and it seems, well, boring. It lack the retro charm of the original, that simple throwback wonderment of that old Snake game.

Phones used to be a lot more expensive. The Nokia 3310 was one of the more affordable at £129.99, and for many it was the first mobile phone they had, bringing freedom of communication away from landlines.

The old Nokia 3310 is available on eBay for around £20 refurbished, the new model will be widely available.